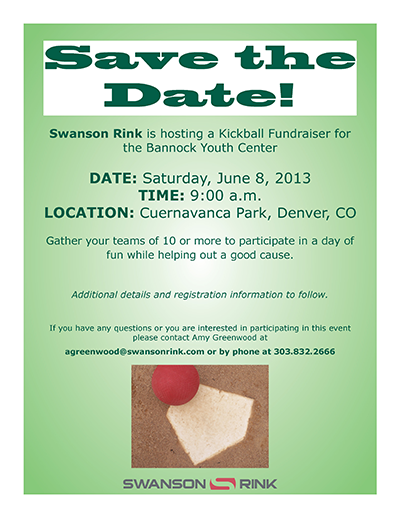 Swanson Rink is set to host a charity kickball tournament on June 8, 2013. This is a FUN, FRIENDLY competition dedicated to helping out a good cause. While the event is bound to bring out some competitiveness in everyone, it is important to remember that the Bannock Youth Center is the real winner! The specific purpose of this event is to help raise money for a scholarship fund to be established at the Bannock Youth Center in Denver, CO.

Swanson Rink has built a strong relationship with the Bannock Youth Center over the past couple of years. During this time we have provided them with childcare, wellness classes, Life Skills coaching, Youth Recognition and holiday parties, as well as a remodel to their facilities.

Be sure to subscribe to our blog to continue to receive information regarding our upcoming kickball tournament.

As part of Swanson Rink’s commitment to the community, our Staff Accountant (and resident yoga instructor), Barbara Krucke, volunteered to lead a Life Skills class at the Bannock Youth Center during the month of April. With the topic being Healthy Cooking, Barbara chose the theme “Beans & Grains.” (Did you know that combining the two makes up a healthy, inexpensive, complete protein source?) Barbara created four recipes to be demonstrated to the class and challenged the Swanson Rink employees to a friendly competition:

The office was divided into four quadrants and each team was asked to donate ¼ of the necessary ingredients for each recipe. The purpose of the food drive was to culminate enough ingredients for participants to take home and recreate the demonstrated meals in their own kitchens. We are pleased to say that this contest brought out the competitive nature of our employees, and that Swanson Rink far exceeded all of Barbara’s expectations!

The new chalkboard wall in the Swanson Rink break area was the topic of conversation over the past week as quadrants began keeping tally by shading in their meters on the company blackboard. Each quadrant wanted to win so badly that employees were even sneaking out on their lunch breaks to gather more groceries and pull ahead of the competition. With one day left in the competition, we are nearly 100 items over our goal. One of our teams has more than doubled their goal-WAY TO GO!

Finally, if you are wondering why we mentioned yoga at the beginning of our blog, Barbara teaches yoga classes both at Swanson Rink and the Bannock Youth Center. The Swanson Rink yoga classes are on a donation-only basis (which Barbara then uses towards supplies for Bannock Youth Center). This quarter’s yoga money is being used to purchase food processors, cutlery sets, and cutting boards, to be raffled off during her cooking classes!

Stay tuned to the blog for updates from the “Beans and Grains” cooking class and information on Barbara’s upcoming smoothie class.

The Bannock Youth Center is operated by Volunteers of America, a non-profit organization in Denver, CO, committed to helping disadvantaged youth, as well as their young children, become independent, contributing members of society.