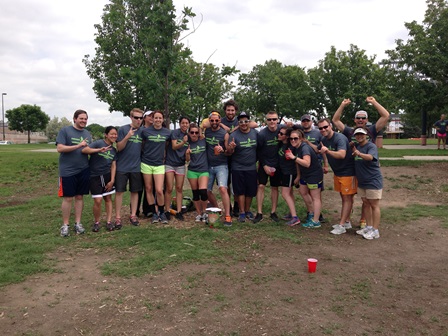 Swanson Rink will be holding our annual kickball tournament benefitting the Volunteers of America’s Bannock Youth Center on Saturday, June 6th from 10 am-2pm at Crestmoor Park in Denver, CO.

Gather your teams of 10 or more to support the Swanson Rink Superior Standards Scholarship for the Bannock Youth Center. Additional details and registration information to follow.

If you have any questions or you are interested in participating in this event please contact Kisa Hanlon at khanlon@swansonrink.com or by phone at 303.832.2666 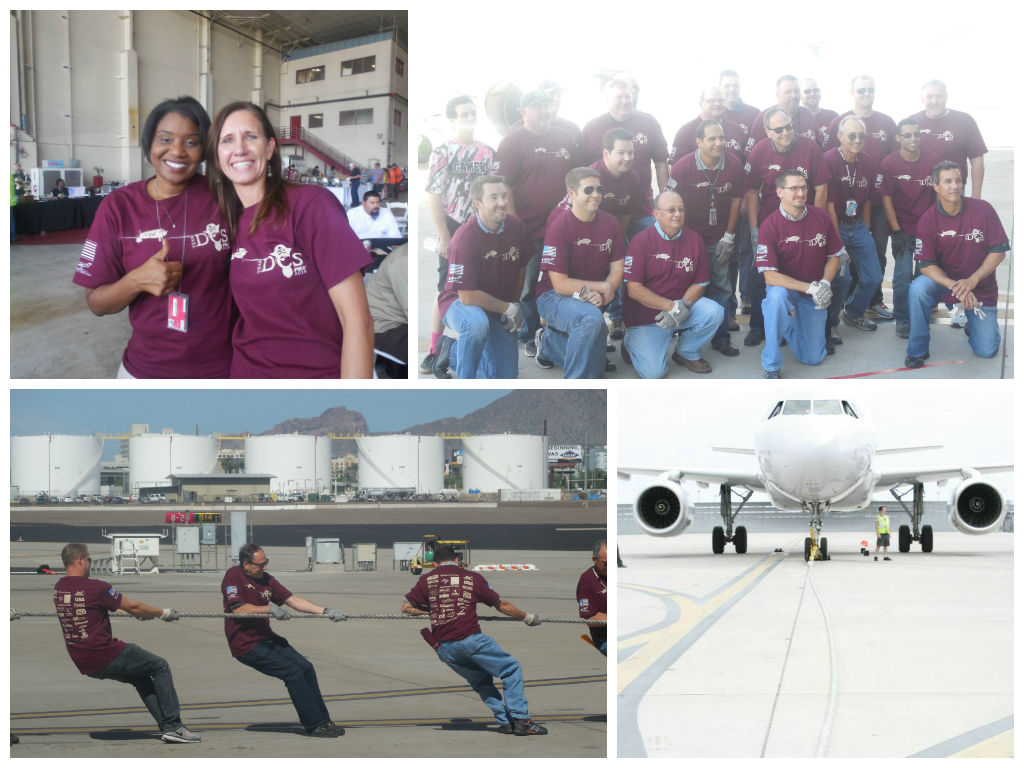 A big thank you to the Swanson Rink Phoenix team for participating in the Aviation Design and Construction Services (DCS) Division for the Sky Harbor Jet Pull! The 11th Annual “Hope Takes Flight” Jet Pull took place on Friday, October 17, 2014, where American Airlines and City of Phoenix employees pulled an Airbus A319 to raise money for the United Way. Way to go Greg Korstad and Marybeth Bunker for participating in this great event!

For the third year in a row, Swanson Rink sponsored the Bannock Youth Center’s Recognition Event at Moe’s BBQ and Bowling. The event had a great turnout, and five participants were recognized for their extraordinary achievement, and two participants celebrated their graduations!

The Bannock Youth Center provides living skills, leadership training, mentoring, and resources to youth in the Volunteers of America transitional living programs. Swanson Rink has been an active member of this organization for over 10 years.

Our Swanson Rink Phoenix employees volunteered at the 8th annual of the Phoenix CANSTRUCTION event benefitting St. Mary’s Food Bank. CANSTRUCTION is an international community service event, where design teams compete to build structures entirely out of canned food! We were teamed up with DWL Architects and Mortenson Construction for this event and entered the structure titled “The Ripple Effect”. We had a great time and are looking forward to participating again next year! 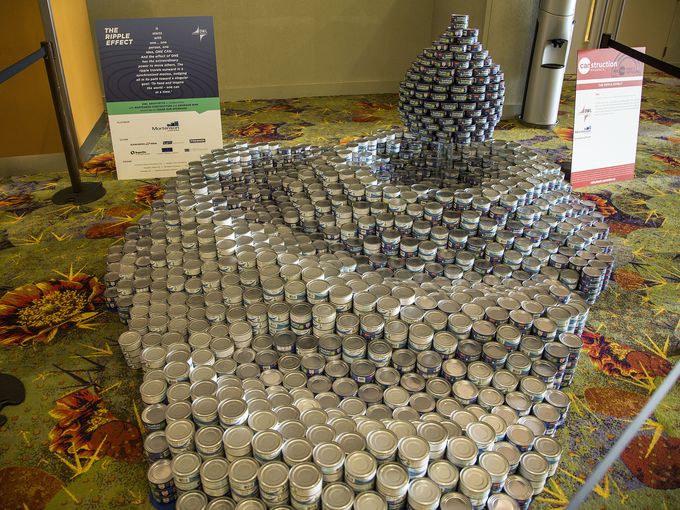 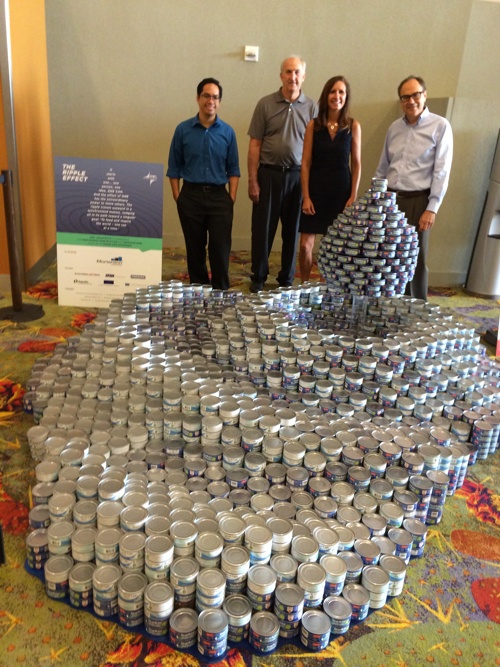 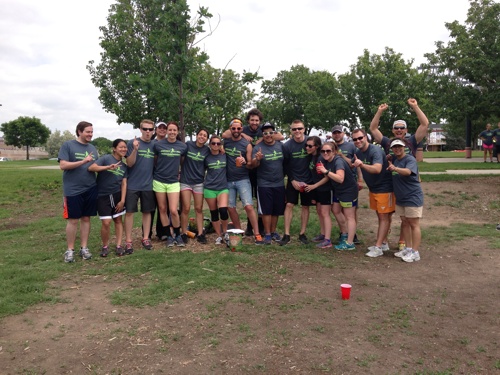 Swanson Rink’s 2nd Annual kickball tournament benefiting the Volunteers of America’s Bannock Youth Center was a huge success, nearly doubling in size from the inaugural event, with over 170 players participating from 16 teams. Through this fundraiser, Swanson Rink was able to raise over $3,500 for the Bannock Youth Center ‘Superior Standards’ Scholarship Fund, and a large part of this was due to the generous raffle prizes we received from area donors. 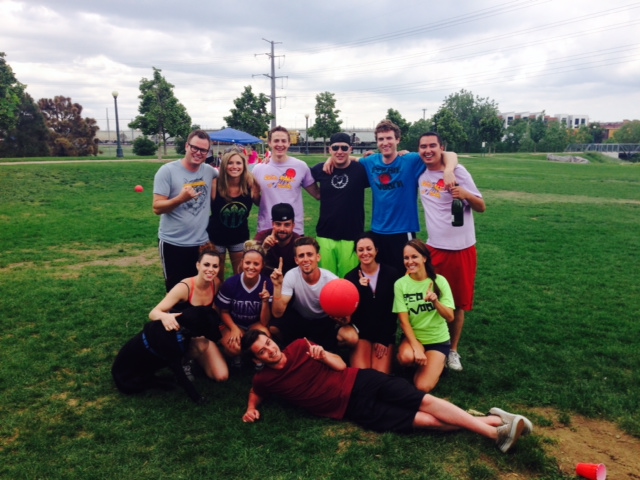 A big thank you to the all the teams that participated. We had several teams join us for the 2nd year in a row which included RJM Construction, Mortenson Construction, VOA, Iron Horse Architects, Gensler, and the returning champs: Snitches Get Stitches. These teams were joined by new competition from Dynalectric, Howell Construction, HPE, Saunders Construction, Braconier, and multiple teams formed from Swanson Rink’s friends, families, and employees.

Finally, congratulations to the winning team, Red Ball & Vodka! We are looking forward to seeing everyone again at next year’s tournament! 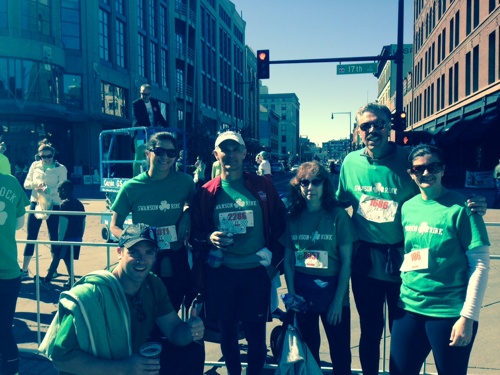 Swanson Rink had a team of 7 runners (and a ‘Leprechaun Leap’ walker) for the 26th Annual ‘Runnin’ of the Green’ 7k race that took place on Sunday, March 16 in downtown Denver. The race celebrates both St. Patrick’s Day and the beginning of spring, with the proceeds benefitting VOA Colorado programs.

This event was a great way to kick off Swanson Rink’s new lunch time run/walk club as part of our ongoing Voluntary Wellness Activity program and also to support our friends at VOA. Swanson Rink continues to encourage community involvement and healthy lifestyles in our employees through a variety of fun activities that are suitable for all interests.

Our team of runners all finished with excellent times; the top 3 Swanson Rink finishers were Josh Armstrong – 33.27, Matt Sellen – 35.33, and Gary Orazio – 37.07. Congratulations to these three and the rest of the Swanson Rink Green Team which included: Rachel Barrett, Kisa Hanlon, Tim Lillehoff, Jim Flint, and Dorothy Lessem. 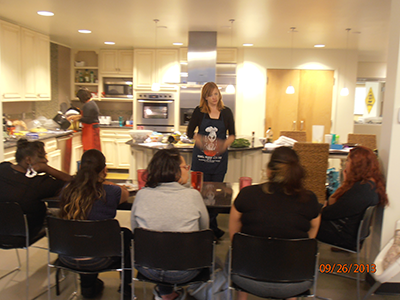 Barbara Krucke continues to demonstrate Swanson Rink’s commitment to the community and to the Bannock Youth Center by teaching Life Skills classes to the program participants. This past Thursday, she let the youth request the topic for cooking class and it was unanimous: lasagna!

Barbara asked the staff at Swanson Rink to help support her efforts by submitting their favorite lasagna recipes for a little “cookbook” she could give to the participants as a take away. Plenty of great recipes were submitted and we are sure that the youth will love each and every one of them! Recipes ranged from vegetable lasagna to lasagna roll ups…yum!

A special thanks to Mary Ann Moody for preparing her special homemade sauce for the class and to Art Boggess for volunteering to help out during the cooking demonstration.

The program participants have come to know and love Barbara for all that she does for them, which is not limited to her fabulous cooking skills and yoga training; Barbara has also become a teacher to them as she is always educating the youth on how to live a healthy lifestyle.

Next up on Barbara’s agenda: an indoor herb garden! She will be taking the donations from this quarter’s yoga held at Swanson Rink to help start the garden at the Bannock Youth Center so that the participants can learn to cook with fresh herbs. We are sure that Barbara will have plenty of fabulous recipes for everyone to try. 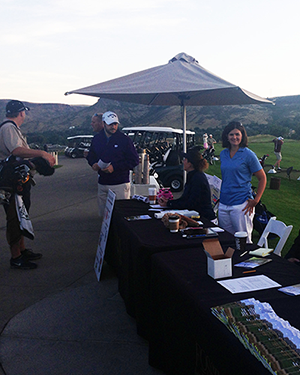 The AFCOM Rocky Mountain Chapter held its inaugural golf tournament this month, consisting of a four-person, 18-hole scramble at Fossil Trace Golf Club, in Golden, Colorado. AFCOM is an international organization that provides education and resources for data center and facilities management professionals around the world. This event brought in over 100 golfers, and was a great networking opportunity for all those involved in the data center industry.

Swanson Rink’s Director of Business Development, Rachel Barrett, serves as the AFCOM Rocky Mountain Chapter Secretary and was an integral part of planning this successful event. Swanson Rink was a proud sponsor for the tournament, and also supported the event by sending out Swanson Rink volunteers and golfers to participate.

Congratulations to all involved in this successful event!

Last week Swanson Rink hosted the 4th Annual IIDA Rocky Mountain Chapter Green Team Expo in our offices. 12 sustainable services product vendors set up booths around Swanson Rink’s office suite, showcasing their newest and most innovative offerings. Over 50 attendees were present at the event, eager to learn about the latest in sustainable interior design concepts. As part of the event, Swanson Rink staff members Clare Epke, IIDA, LEED AP BD+C, LEED AP O+M, Project Manager and Sustainable Design Coordinator, and Sohana Arni, LC, Project Manager & Lighting Design Specialist, gave a CEU presentation on updates in LEED and lighting efficient design. Swanson Rink would like to congratulate IIDA on another successful event and thank them for allowing us to be a part of it! 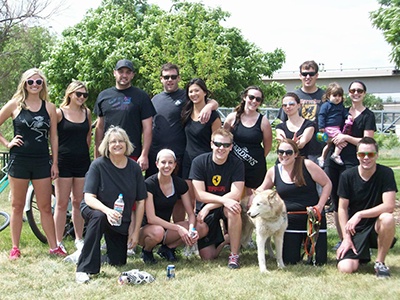 Swanson Rink hosted a kickball tournament this past Saturday to raise money for the Volunteers of America’s Bannock Youth Center. The purpose of this event was to raise money for a scholarship fund to be put in place at the Bannock Youth Center. Through this event, Swanson Rink was able to raise well over $2,000 as a basis for the fund and a large part of this was due to the generous raffle prizes we received from area donors.

We were joined by nine other teams eager to take home first place and the competition was fierce! Swanson Rink’s CAD technician Ryan Kelley put together his own team, and they were crowned first place after 5 rounds of play. It was a close championship game between them and Mortenson Construction who took home second place. In the game for third place, RJM Contractors came out victorious! Congrats to all of you, and the other incredible competitors from Iron Horse Architects, OZ Architecture, E Light Electric, Gensler, MOA Architecture, Volunteers of America, and Swanson Rink. We look forward to seeing these all of this year’s teams again, and can’t wait to find out who will be the new competition.

Swanson Rink had high hopes that this event would be the first on many of its kind, and we are confident after the success of this tournament that this event will continue to grow for many years to come. We would like to extend a BIG thank you to all of our participants, volunteers, and donors, we could not have done it without you!